The final 8 years of my career were very creatively satisfying.  I was fortunate to do a wide variety of special pieces. In addition to the Mary Colter-inspired bunnies, I built a number of gates, railings and special one-of-a-kind sculptural pieces.  It was during the last 5 years that I started developing my skills in copper embossing, which I will be creating in for the duration.  Here are the highlights of these years.
Chandelier, 36" diameter.  Made in partnership with Sam Brinegar. 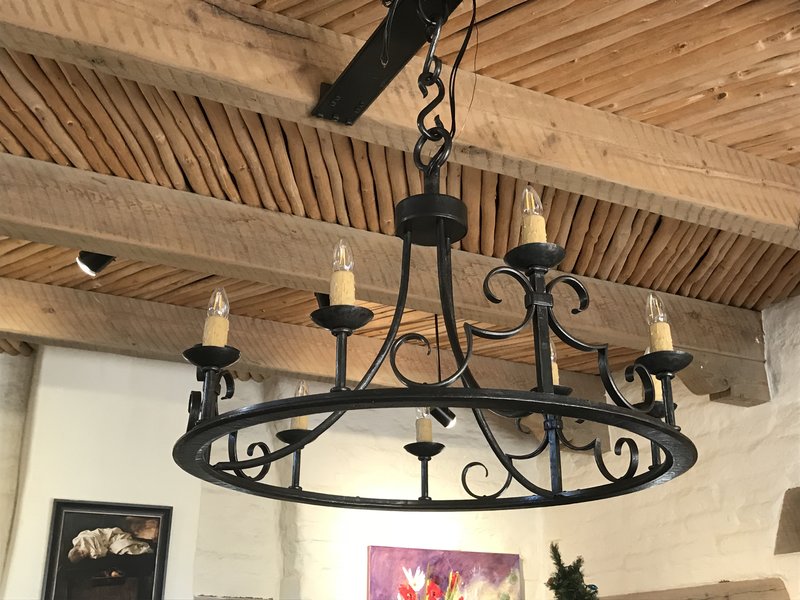 Chandelier, 42" diameter.  Made in partnership with Sam Brinegar. 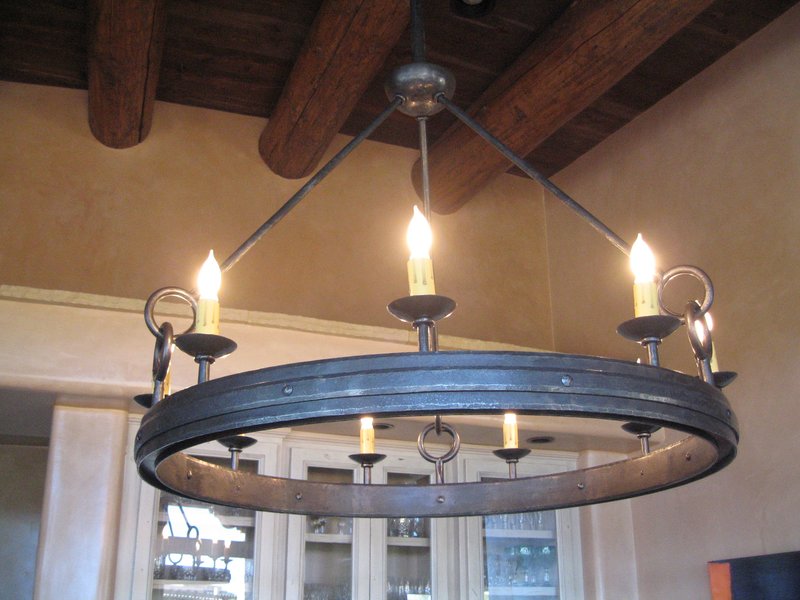 During this period, l built two headboards from the same design concept.  The first was a piece that I made for myself during a slow spell.  The second is a variation made for an appreciative client. 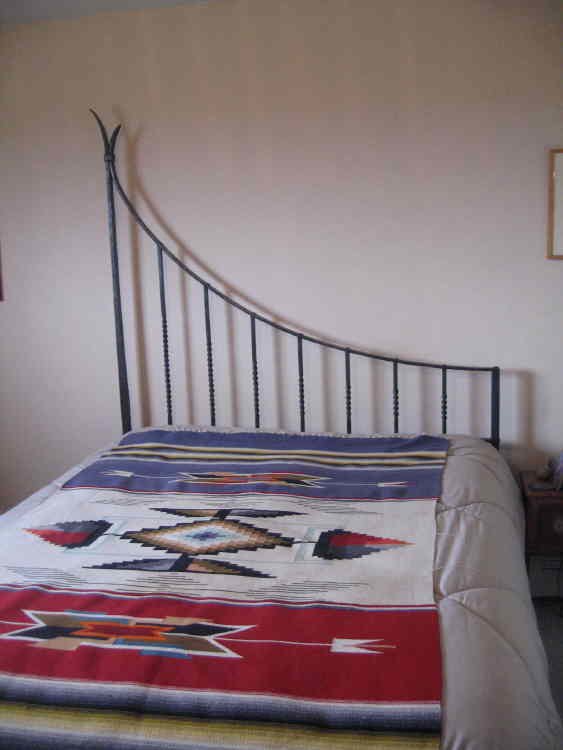 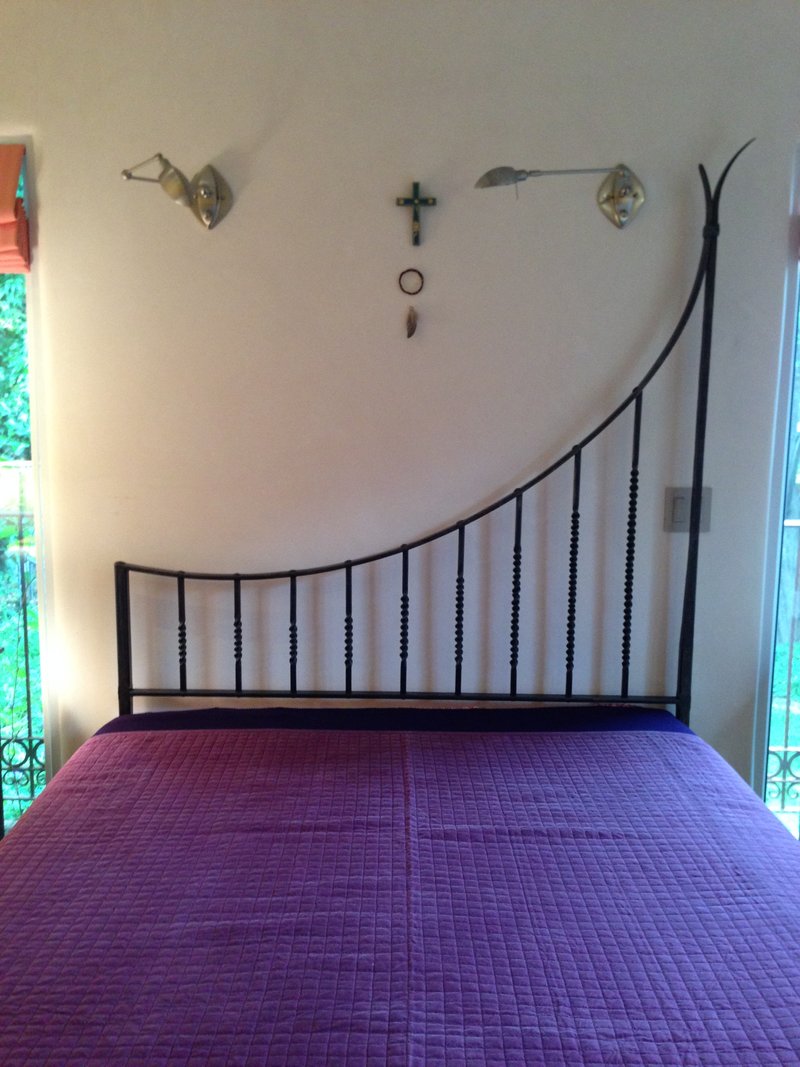 A project on the East Side of Santa Fe took the best part of a year.  There were railings, fireplace accessories and a pair of fireproof flooring sections in front of the fireplaces. 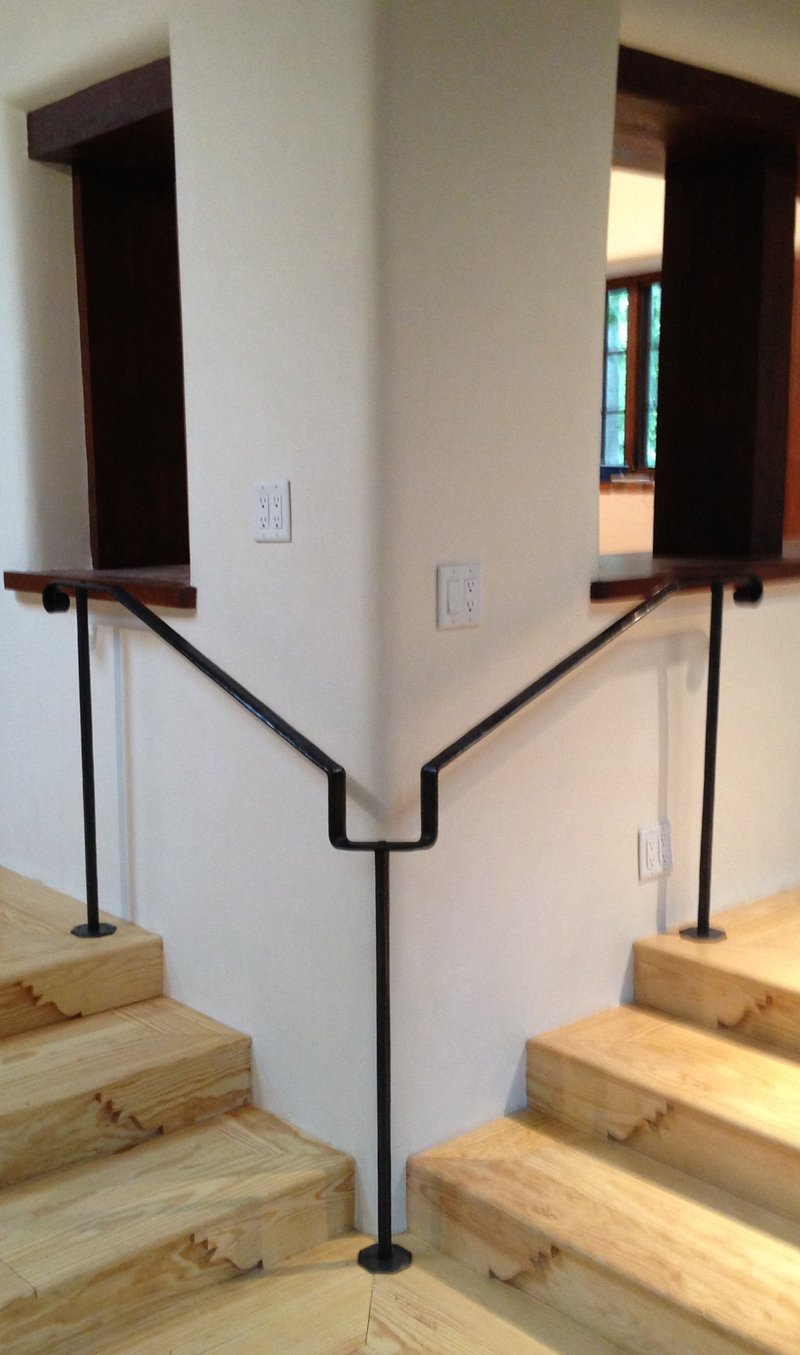 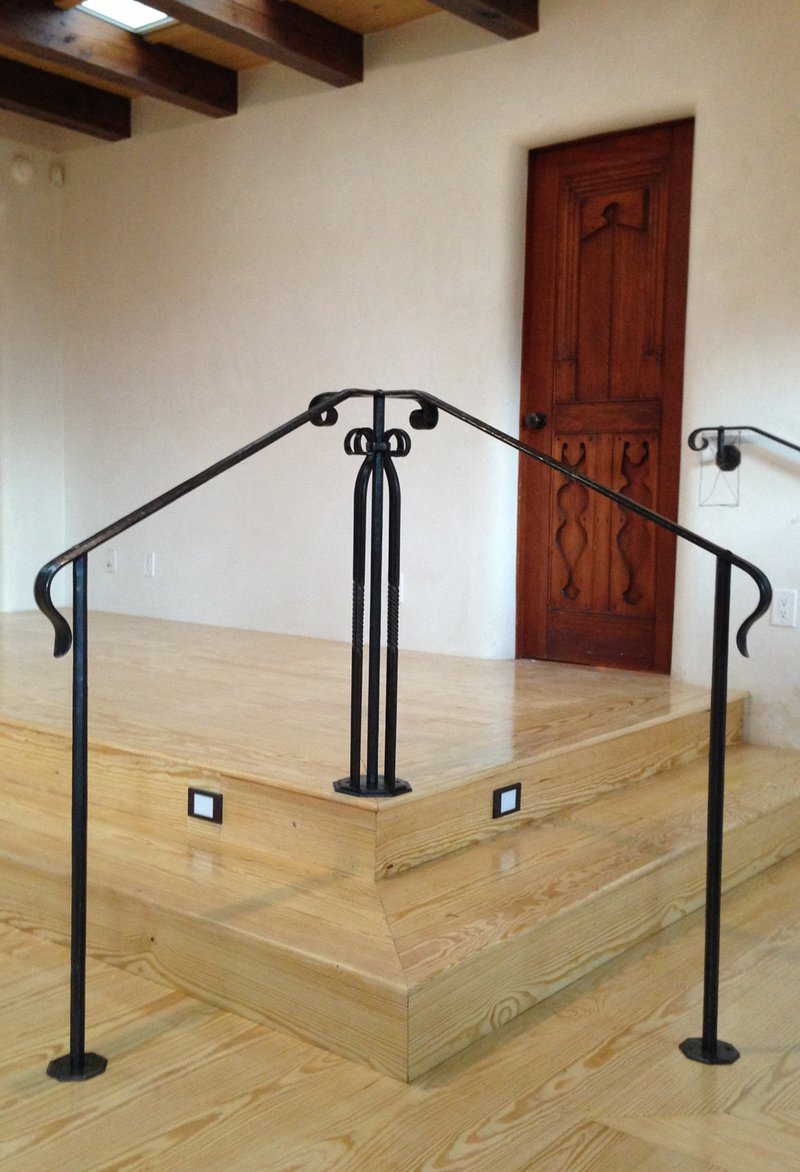 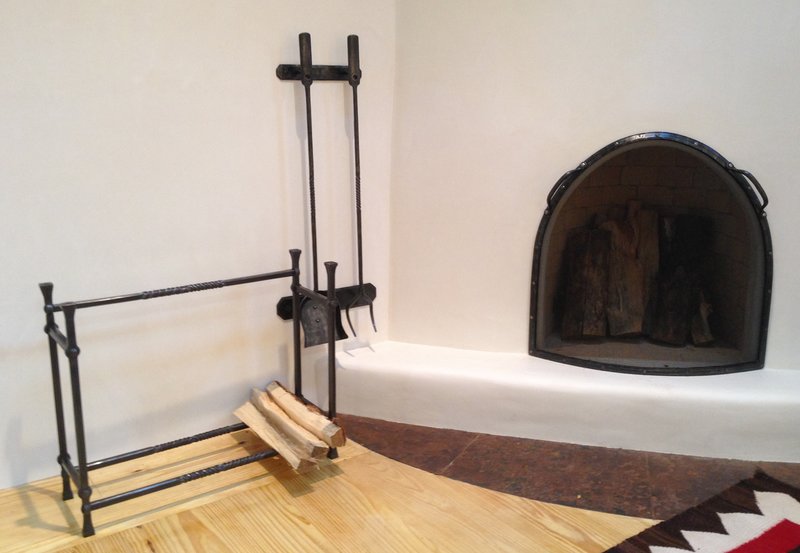 I was blessed to be able to create this traditional courtyard entry gate.  Unfortunately, the light was very strong when I installed the gate, so I'm including the original drawing I created for the project. 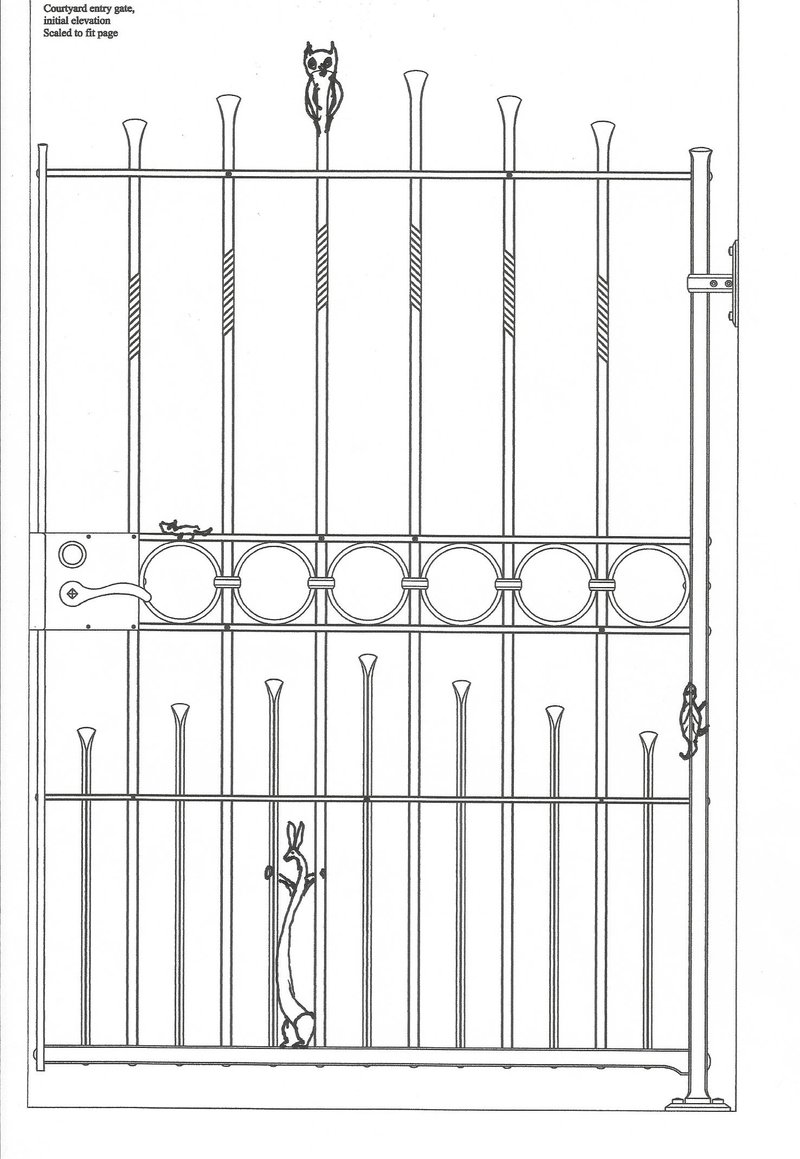 The gate included one of my bunnies, as well as a lizard, horned toad and an owl. 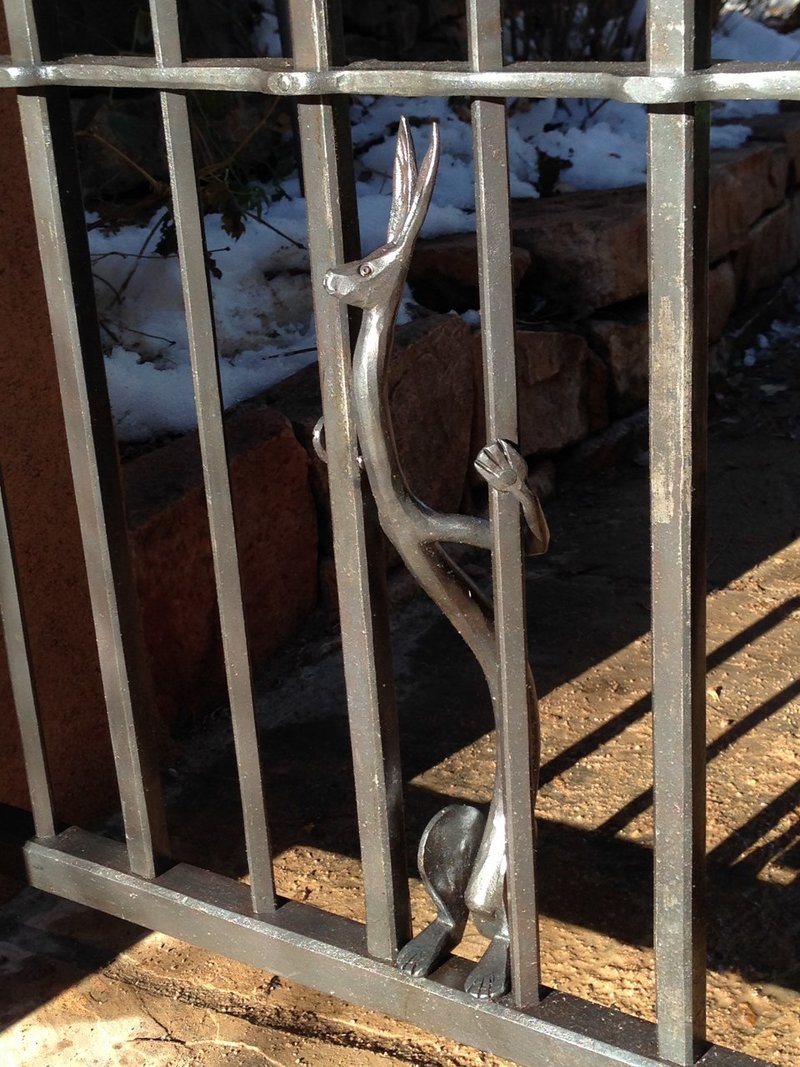 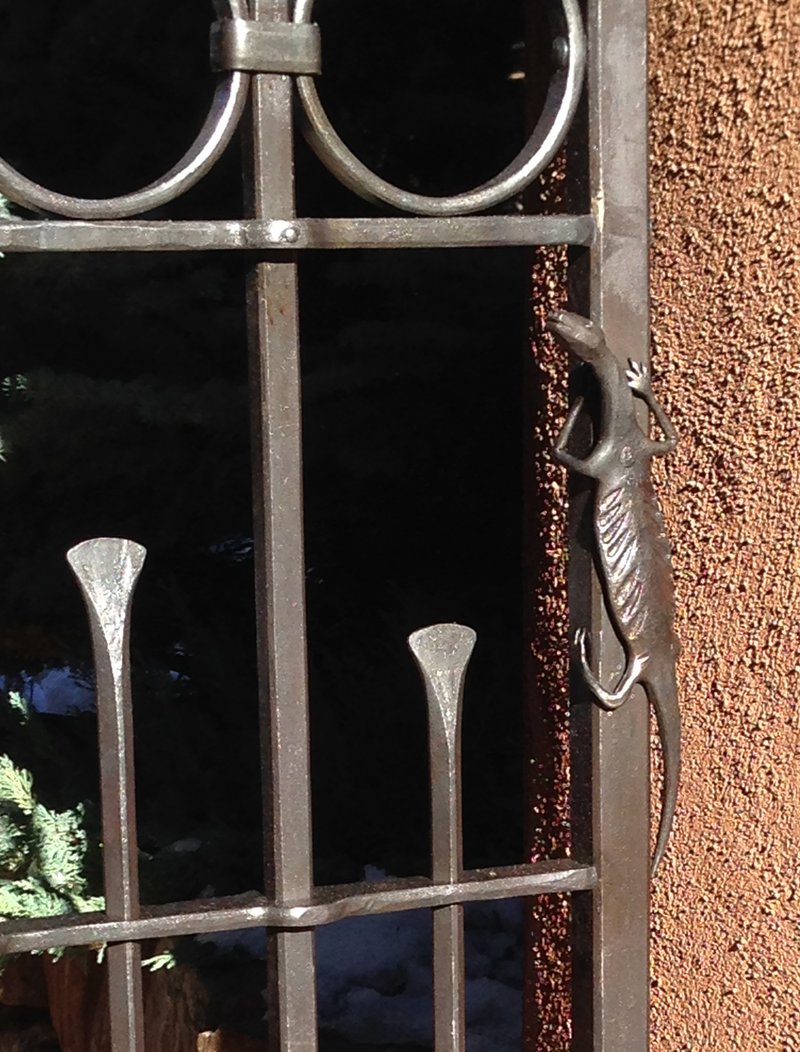 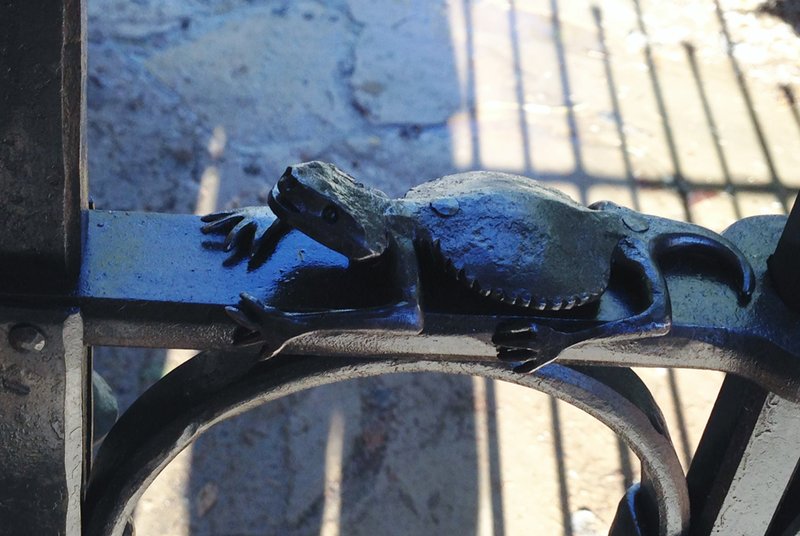 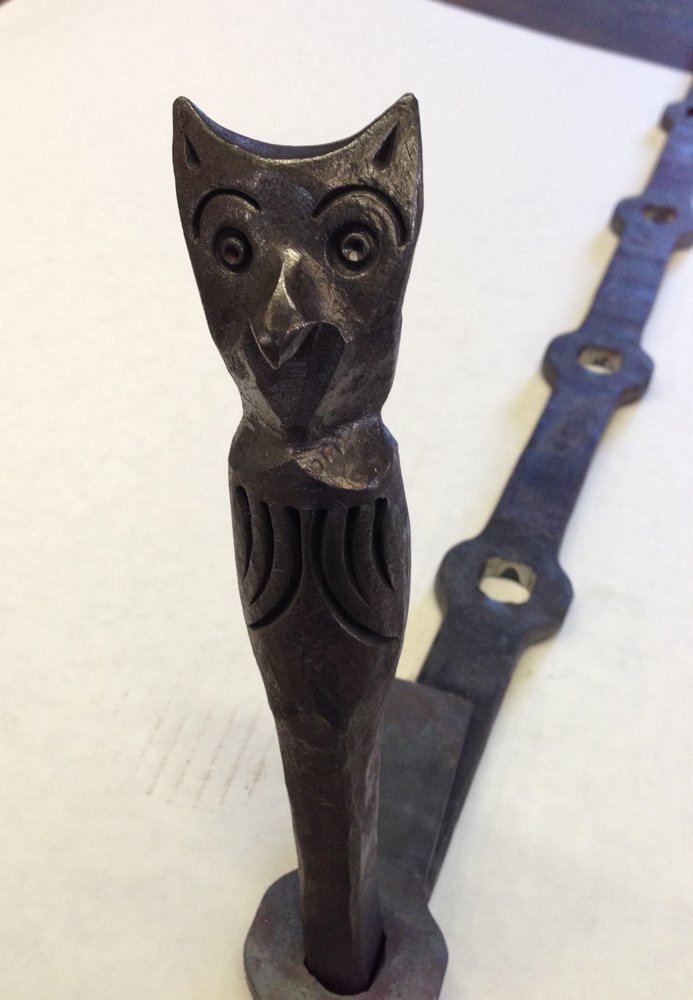 "Kyoto Roses" is a piece I created for a lifetime friend, based on our mutual love of the city.  During my visit there, I saw a bamboo gate and a wooden fence that I could envision being created in steel. The client had a special place in his home to highlight a piece combining the two.  I had been overwhelmed by the flowers everywhere in Kyoto, so I added a vase to the gate post, with one rose for each of his daughters. 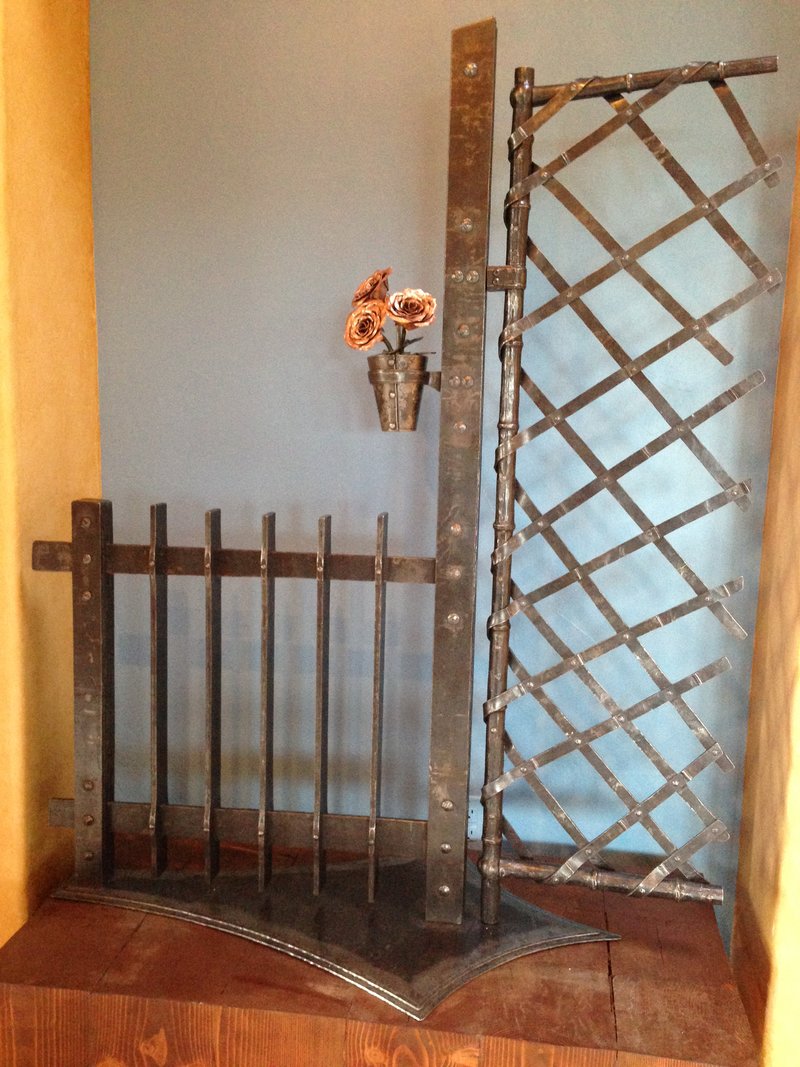 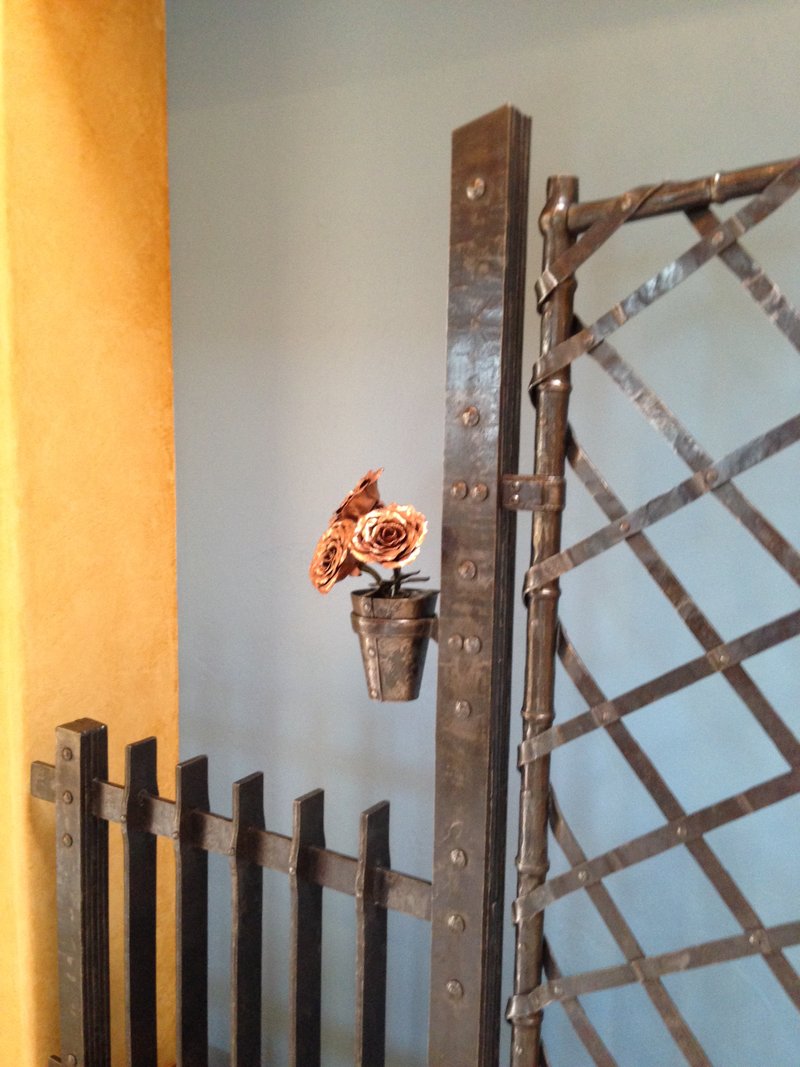 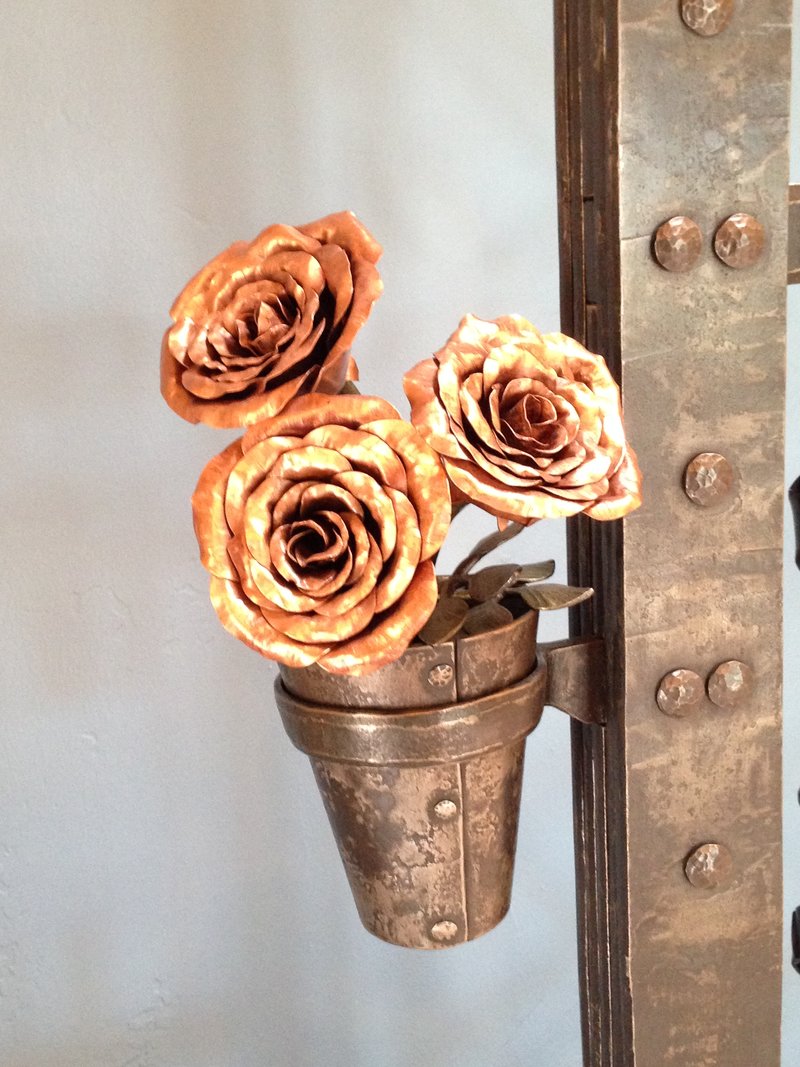 For this same client, I made two of the same candelabra design, only several years apart. 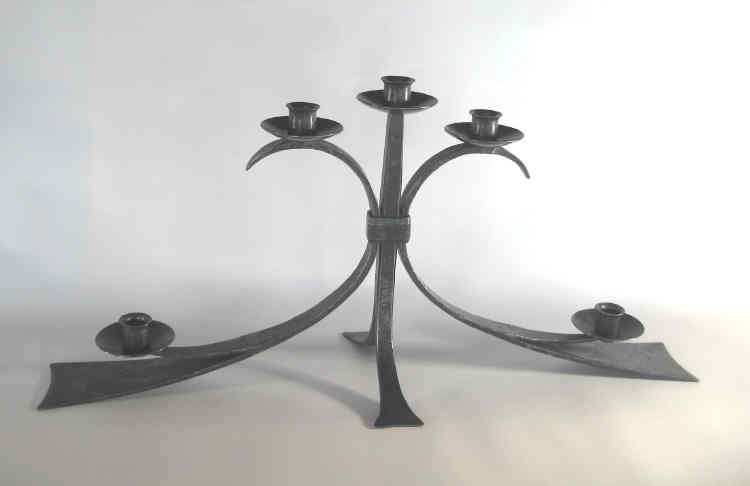 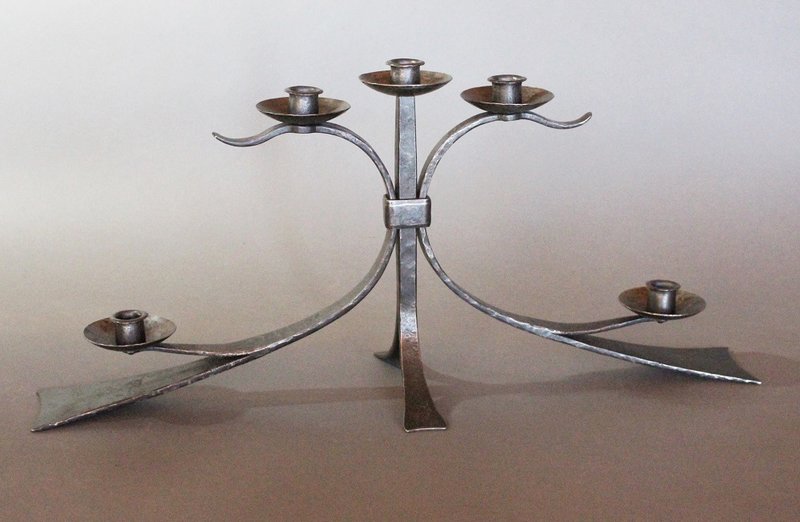 Throughout these years, there was always a steady flow of fireplace screens to make.  Here is a special 2 door model, with the design based on a nearby Navajo rug. 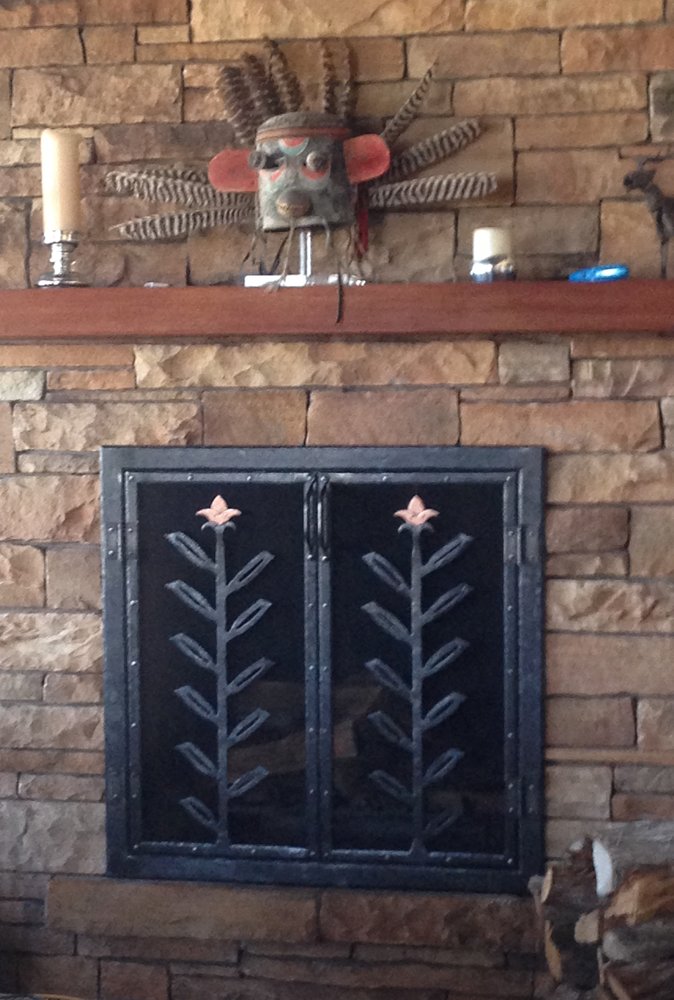 Over the course of the final 4 years, I did many different projects for an estate on the north side of Santa Fe.  I was able to make unique custom hardware for antique doors, matching the different styles of the collected doors, and for newly-created pieces of cabinetry.  In contrast to the traditional forging of the hardware, I was commissioned to make 7 different welded gates from the same modern design, 2 double gates and 3 singles. 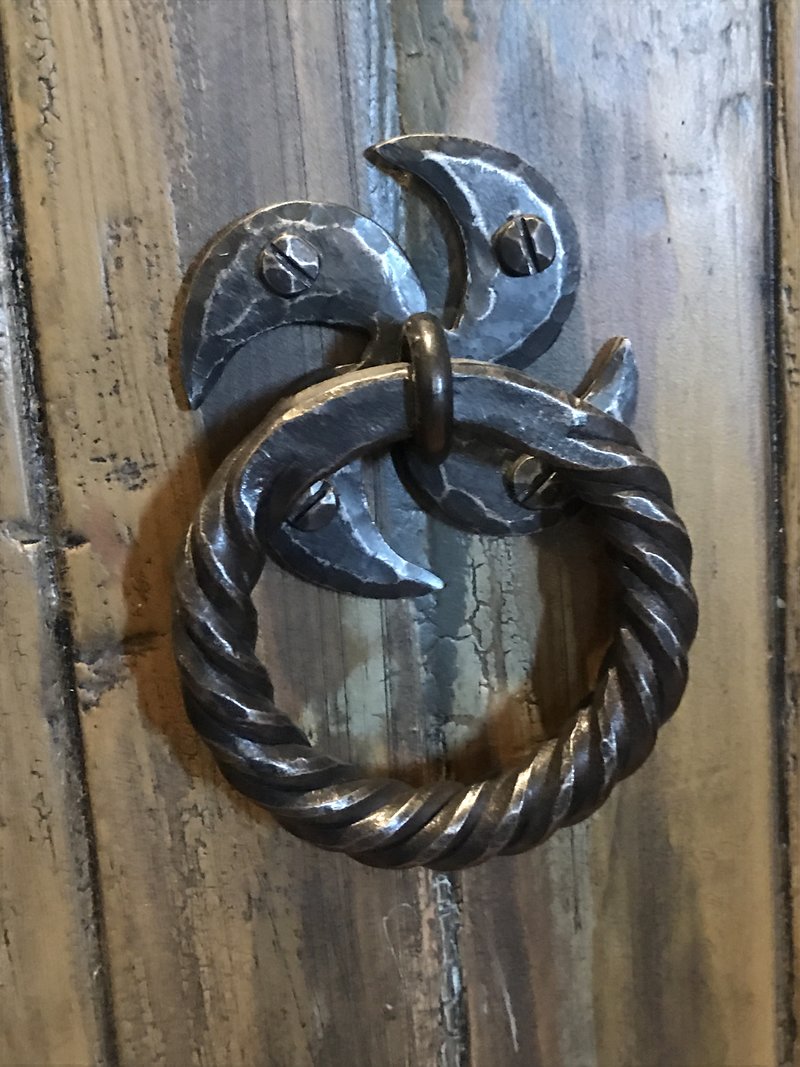 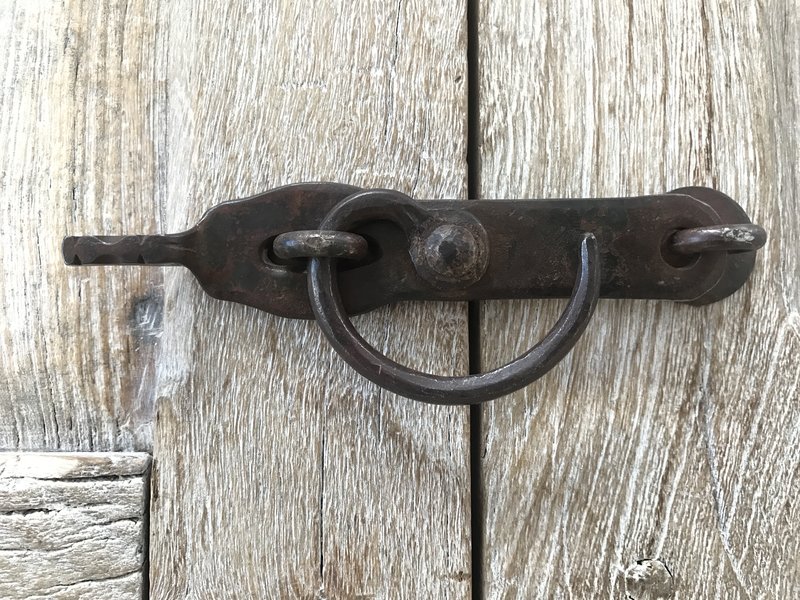 The door below was originally one of a pair of arch-topped doors.  After the woodworkers rebuilt them into rectangular doors, I matched the original strapping, rosettes and clavos to finish out the doors.  This was done on 4 doors.

Here are shop photos of my work in reproducing the clavos.

Here are several photos of some of the seven fabricated gates I made for this estate.

During this period of time, I was privileged to be one of the smiths who made bases for "Aurora" sculptures by noted Santa Fe glass artist Elodie Holmes.  You can view her exceptional work at her website, www.liquidlightglass.com  Here are shop photos of a couple of the unique pieces I made with her.

Two of the more challenging projects I did during this time involved re-working existing pieces into new pieces for the home of an old friend from my Philmont years.  In the first, I took existing strap steel and re-shaped it to create a stair railing.  I built a new framework and used the old steel to provide the infill detail.  The finished railing had a wooden cap rail created by the woodworker who re-built the stairs.  Some photos of the job in progress are included.

At the beginning, the framework is laid out, and the sandblasted old parts are scattered about to select and modify for inclusion in this jigsaw puzzle.

The pieces were labeled prior to disassembling them for cleaning preparatory to assembly.

After assembly, the entire assembly was chemically blackened, then waxed, transported to Colorado and installed.

Here is the finished railing prior to the installation of the wooden cap rail.

The second project for this client involved taking a pair of ordinary fabricated gates already on the property and embellishing them with morning glory vines and a hummingbird.  Unfortunately, I only have the one poor photograph of the completed installation, but felt that this "silk purse from a sow's ear" project deserved inclusion here.

Here is the hummingbird, who was inserted into one of the semicircles.

The finished project after a New Mexico snowstorm.

Throughout my career, I made many dragons.  This motif has been a common fixture in ironwork for centuries and appears in many cultures in many forms.  In the last few months of my career, I completed two of them that had been begun years ago.  This first one, "Mother with Triplets," is a coat hook.

The second, "The Moody Dragon," became a variant of the small Colter bunny series I created.  His base is 8" in diameter and the bowl is 5" in diameter.

One of my final projects was a re-purposing of scrap copper vise jaws.  During most of my career, I worked with copper covers on my steel vises, as shown here and in the hummingbird photo above.  They protected the hot steel from being marred by the steel vise jaws, and the copper actually gripped better than the steel jaws.  As they wore out over the years, I threw them in a pile under the bench, never quite sure what to do with them.  It came to me last winter to flatten them out and create a piece of art from them.  They are connected by copper rivets and have a light green patina.  All of the hammer blows and chisel cuts created wonderful textures.  The title, "Vise Jaw Covers, Etc." refers to the additional copper pieces used to connect and balance the piece.